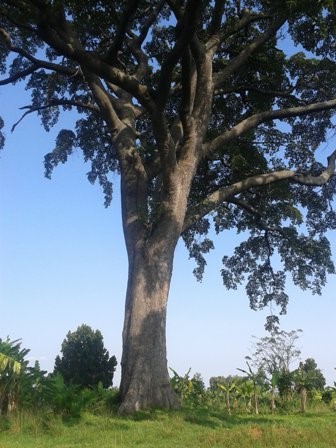 This tree was a meeting place for cultural leaders who used to sit under it to perform their clan rituals and settle family disputes. They were nine (9) in succession. The last of them was Rwomire. He had a gun which he acquired from Arabs in exchange of ivory at that time. His son Daudi Bakandonda was the sub county chief of kihihi in 1913.

This tree was initially called “Oruti rugamba” meaning a tree that speaks because there were human voices which were heard whenever a person could pass near the tree at night. It was believed that if any one made a cut on the tree, blood would come out and such a person who cut it would die that night. The native Banyabutumbi respect it as they believe it is enshrined with their cultural spirits.

It is where British made an agreement that Belgian authorities shall not cross river Ishasha the border of Uganda with Zaire (currently known as the democratic republic of Congo D.R.C).

Enjoy a nature walk to this historical tree (that is 450 years old). It is only 1.5 km from Suba motel, and the reception can help organise a trip to it.